Dumb Luck and the Kindness of Strangers - John Gierach

Home / Dumb Luck and the Kindness of Strangers - John Gierach 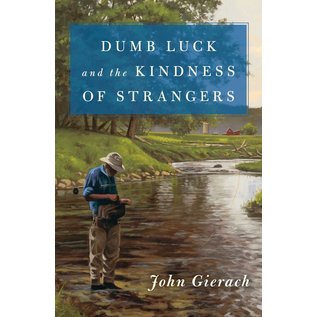 In Dumb Luck and the Kindness of Strangers, John Gierach recalls his early experience moving to Colorado and buying his first resident fishing license. He asked when the fishing season opened, only to be told that it never actually ends; he could fish as long as he could stand to be outside. That, he says, is when he knew he had moved to the right place.

Fly-fishers of all stripes will understand perfectly-but Gierach writes so winningly about the joys and tribulations of the fly-fishing life that even people who don't fish will enjoy this newest collection of essays from "America's best fishing writer" (Houston Chronicle).

Gierach's sharp wit and self-deprecating sense of humor have earned him comparisons to Mark Twain and James Thurbur, while his love of fishing merits comparisons to Norman Maclean and Ermest Hemmingway. After more than twenty books he has never lost touch with the fun and frustration every fisherman experiences, which is why the Wall Street Journal hailed him as "the voice of the common angler." But as his fans know, "What Gierach actually writes about is life, as seen through the eyes of a guy who spends a lot of him time with a fly rod in hand" (The Plain Dealer).

Gierach succinctly sums up the appeal of fly-fishing as "an acquired taste that reintroduces the chaos of uncertainty back into our well-regulated lives." Or, to put it a little differently, fly-fishing may not be the perfect antidote to what is wrong with our world, but then again, what is?